International Nurses Day is a day that recognises the contribution that nurses make to society. In recognition of their efforts, meet Emma Kemp, registered nurse and ovarian cancer survivor. Emma's story is one of strength and inspiration. Her personal experience with cancer has altered her views on her role as a registered nurse. Emma's diagnosis has changed her perspective with her own patients and has motivated her to contribute to ANZGOG's Survivors Teaching Students program. 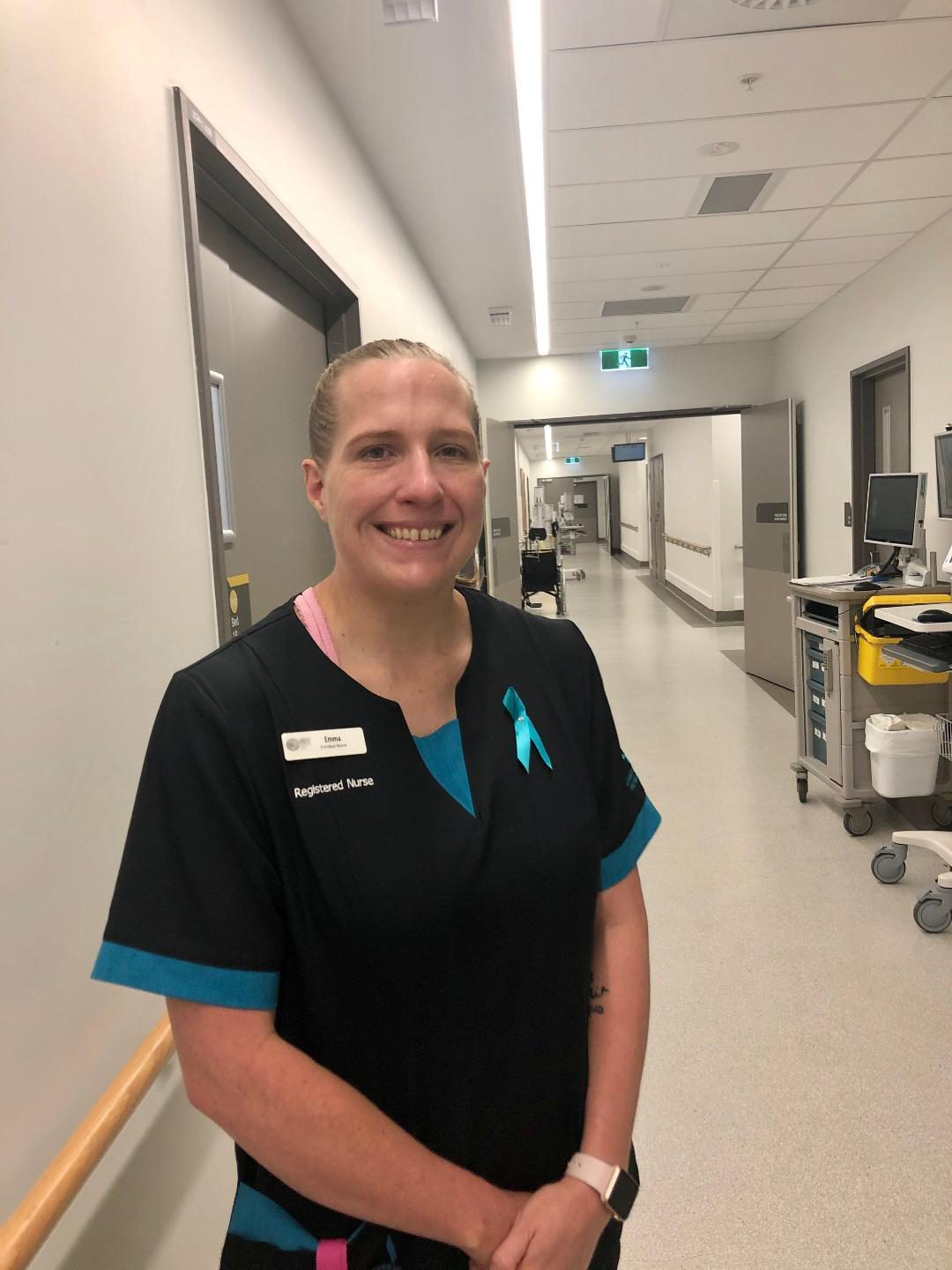 My journey with ovarian cancer began towards the end of 2011. I spent the first half of 2011 deployed in the middle east as a RADAR and SONAR operator on HMAS Stuart. I had booked and paid for a holiday at the end of the year to commemorate a challenging year.

In September/October of 2011 is when I started to experience odd symptoms. I was frequently passing urine, feeling full quickly after a meal and had bleeding in-between my periods. I dismissed these. The one I could not ignore was a mass I could easily feel in my pelvis.

"I went to my GP with these symptoms and went for imaging. I had a pelvic ultrasound and an abdo-pelvic CT. The CT revealed a 15cm mass in my pelvis, unsure of origin. I went to a gynaecologist, and soon my dreams of my end of year holiday were dashed when I learned I needed surgery."

It was assumed that it was a fibroid as I was young (24) at the time. I had my surgery on 1st December 2011 and received my diagnosis a week later over the phone. I was in complete and utter shock.

On December 6th, I was at home alone. I received a phone call that nobody wants to get. My doctor informed me that I had Malignant Ovarian Dysgerminoma. I heard the word ‘malignant’ and my heart sank. I had cancer. A rare, but treatable form of ovarian cancer. I was told it’s the ‘good’ cancer to have as it has a good prognosis and responds well to treatment.

"I still couldn’t believe I had cancer."

I was initially told I didn’t require treatment. Despite receiving a good prognosis from my gynaecological oncologist, being so young and told that you have cancer is completely and utterly terrifying.

On December 22nd, I received a phone call from the gynaecological oncologist, advising that I required chemotherapy. I remember going into the cancer outpatients the very next day and being informed of my appointments, blood tests, given an info sheet about my treatment. I was still in shock and didn’t take the info in. I walked into the treatment area with my mother where we saw people connected to IV pumps. Frail and bald. My mum and I bawled our eyes out knowing this was soon going to be me.

I learned that I was stage 3A Ovarian Dysgerminoma - as my gynaecological oncologist had said - weak, non-aggressive, reacts well to chemotherapy. I had 3 cycles of BEP. I started chemo on 27th December 2011 and completed chemo on 26th February 2012. The treatment significantly affected my quality of life as I experienced the awful chemotherapy side effects - taste perception changes, fatigue, hair loss and isolation. I was fortunate in that the Navy allowed me to have 3 months of sick leave for me to have my surgery and treatment. I returned to work at part-time capacity shortly after completing chemotherapy.

I learned to scuba dive on my first anniversary of my diagnosis and it’s a hobby that I’ve pursued since. I’ve since reached the highest level of recreational SCUBA diving. Diving reminds me that I’m free of cancer.

I left the navy in 2014 to pursue a career in nursing. At the end of 2019 I completed my bachelor of nursing and am currently working as a Registered Nurse in Canberra. My relationship with cancer has evolved over time from the initial shock and fear to now wanting to be an advocate and raise awareness of ovarian cancer.

Now working as a Registered Nurse, how does your personal experience with cancer affect this?

My personal experience with cancer impacts my role as a nurse particularly in my rehabilitation role as I am testament that people can overcome a traumatic experience like cancer and thrive. I encourage my patients to take each day as it comes. And it’s okay to not feel positive or okay at times.

The taste perception changes I experienced during chemo have helped me care for patients with appetite problems. I encourage my patients to eat whatever they can tolerate which is what I was taught. I can empathise with patients with a recent diagnosis of cancer and how this affects them.

How is the role of a nurse important for cancer patients?

How did you first get involved with Survivors Teaching Students (STS)?

The benefits of STS are enormous. So often, we learn about medical conditions via a textbook, but STS puts a human face to the condition and reminds healthcare workers that there is a person with a life and family and not just a medical condition. It raises awareness about ovarian cancer. In addition, for me, I show that it’s not just post-menopausal women affected by ovarian cancer. I was aged just 24 at the time of diagnosis. I had different challenges and fears compared to post-menopausal women.

"It encourages health professionals to really think of the human behind the condition."

For STS volunteers, it’s a chance to get our stories out there - to raise awareness of a very fatal cancer for which not much is known. We are the voice of the 54% of women diagnosed with ovarian cancer that don’t make it past 5 years after diagnosis. It’s also a chance to network with other women with ovarian cancer, so we are able to validate our own feelings and don’t feel so isolated.

Thank you Emma for sharing your inspiring story with WomenCan to help women live better and live longer.

What is Survivors Teaching Students?

Want to help women like Emma? The Westfield Local Heroes program recognises and awards funds to community members who are doing inspiring work. You can help fund the STS program by voting for Helen Gooden, National Manager of Survivors Teaching Students, click here. 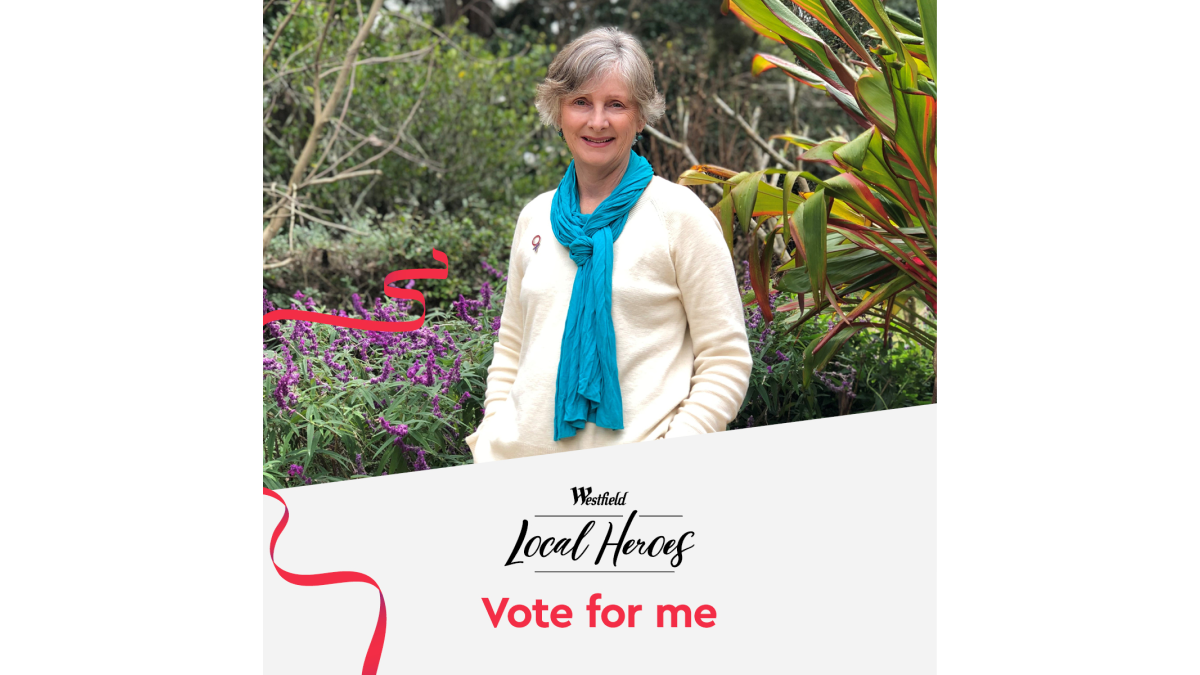