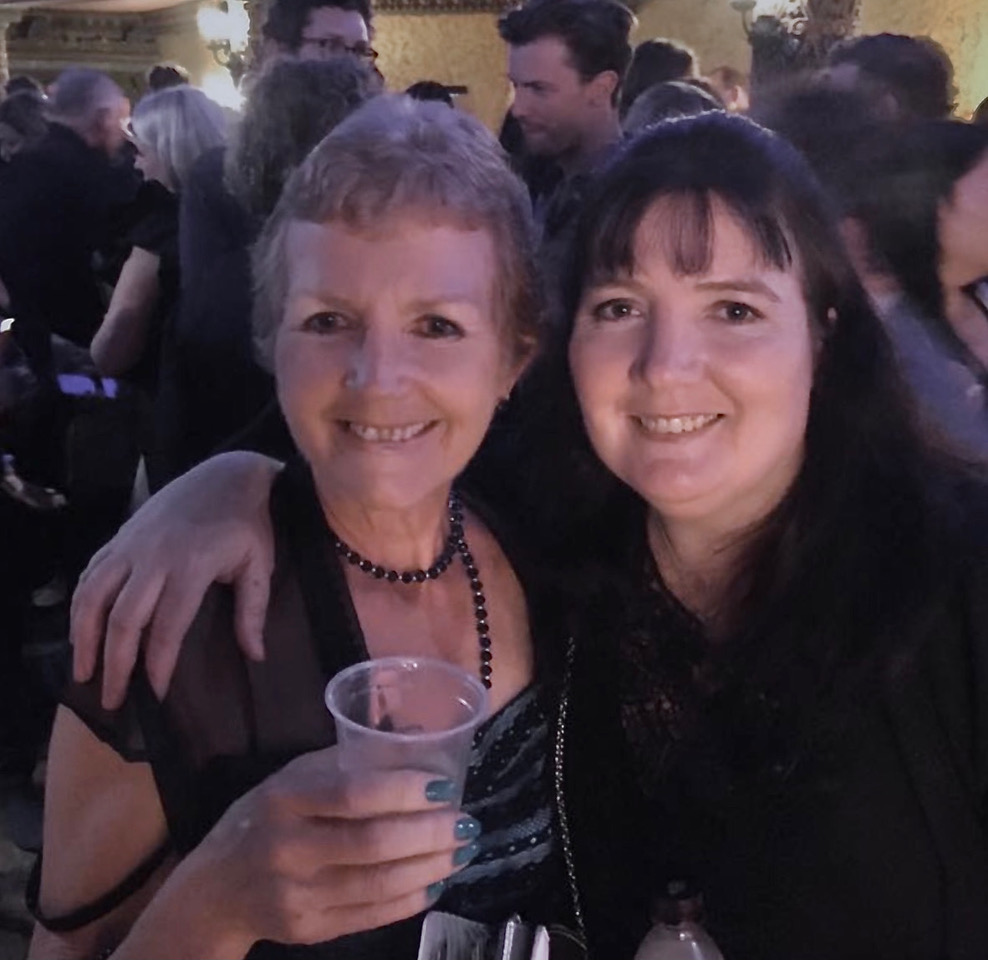 That Merry magic: surviving cancer with a smile

From one-liners with her chemo team to dinnertime jokes with her grandchildren, Merry Bentley from Sydney has spent eight years battling endometrial cancer the only way she knows how – with fierce determination and her trademark positivity. We caught up with Merry and her daughter, Holly Oakley, to find out more about her cancer journey and her unique way of getting through the tough moments.

What initially prompted you to go and see your doctor?

“Cancer does not just appear in your body the day before diagnosis, it has an ‘incubation’ leading a quiet, unseen and, in my case, unfelt existence for at least 10 years previously. My cancer had a perfect hiding place, until one April day in 2013 it emerged. I severely haemorrhaged, the secret was uncovered and my life changed completely.

Luckily – if luck can be expressed at such a time – I worked in an IVF clinic and had direct contact with gynaecologists who arranged an urgent laparoscopy to determine the cause. Tumours had invaded the whole uterine wall, so I was immediately referred to a gynaecological oncologist who performed a hysterectomy and tumour biopsy.”

How did you feel when you were diagnosed with endometrial cancer?

“The oncologist chose to use a worn-out cliché. There I was, sitting in front of the doctor, holding the hands of my two grown-up sons: ‘What do you want first, the good news or the bad news?’ Really there is no choice, you have to get the bad news first in order for there to be good news.

Although I was expecting the worst when confronted with this option, it still came as a shock when I got the cancer diagnosis, almost as if it were a nightmare that I would suddenly wake up from. The grip tightened on my hands as I realised the impact this news was having on my boys, and I quickly came back to reality. The good news instilled hope – I was to start on the first of my clinical trials which offered a 75% success rate of being cancer free. The decision was a no-brainer, and life as I knew it changed forever on that day.”

What made you decide to take part in a clinical trial?

“I’m from Yorkshire in the north of England, and in my younger days I worked in cancer research in Leeds. I knew from experience that clinical trials enabled scientists to progress in understanding the formation of these rogue cells. I was very altruistic in those days, believing that I was put on this earth to be part of a pioneering breakthrough for humanity.

Alas, my vision did not materialise, but now here I was getting a second chance to help other scientists discover more about this insidious disease. It was meant to be – once again, I was working towards a cancer breakthrough.

Saying yes to my first clinical trial was inevitable.”

Can you tell us a tough time during your treatment and what got you through it?

“Three years had quickly passed since my initial diagnosis. The first year, I had monthly hospital appointments; the second year, three-monthly appointments; and in the third year, appointments were reduced to six-monthly. Each appointment accompanied blood tests and yearly x-rays. I believed I was getting my life back to some normality.

Sadly, life can sometimes be unkind. As John Lennon so wisely predicted in one of his songs, ‘Life is what happens to you while you’re busy making other plans.’ Some call it destiny, some call it fate – whatever it’s called, it’s a stab in the heart when you’re least expecting it.

It was a six-monthly appointment comprising the usual blood work and x-ray. It was 2016, it was June, it was my birthday! I was taken into a stark medical consulting room and wished a happy birthday before being told that the cancer had metastasised to my lungs. No good news or bad news this time, it was all bad news. I had 18 months to live.

I had no support on that day from my family as I was not expecting this news. I felt alone and frightened – I had never considered a death sentence. I wanted to live, see my grandchildren reach adulthood, and grow old disgracefully. It was obvious that was not to be my destiny.

My writing kept me sane. I started to journal and it helped when I couldn’t sleep. I wrote down my feelings, as bizarre as they were. I was determined to evaluate my life while optimistically hoping that the universe may just let me off on a good behaviour bond!”

Can you tell us about one of the lighter moments during your treatment or something that made you smile?

“Chemotherapy became three-weekly routines on the trials that followed my death sentence. As is evident in most chemotherapy infusions, the loss of hair is a profound change to one’s appearance and entails complete hair loss, including eyebrows, lashes, as well as the nether regions.

My younger grandchildren, whom I saw regularly, informed me one day that their daddy (my son) had told them that I lost all my hair because I didn’t eat all my vegetables at dinnertimes. I smiled at the innocent answer to the reason for my bald head and confirmed this explanation, stressing the importance of eating veggies. Dinnertimes have never been a problem since!”

What do you do to support your mental health during treatment?

“Maintaining your sanity during endless and sometimes painful treatments is so important. One of my favourite sayings derived from my upbringing in the north of England is: ‘It’s a place where the birds fly backwards so they don’t get the muck in their eyes.’ I guess I’ve been flying backwards over the last few years while documenting where I’ve been.

I am a positive soul, even my blood group is B positive. Walking (I only fly backwards!) is my mode of exercise. I have a constant companion in the form of a Whippet, a parrot that talks with a Yorkshire accent and an Alzheimic cat. Yes, even animals have their crosses to bare.

I write children’s stories, and spiritually attempt to stay in tune with the universe – it all works for me. Being in control of what time I do have on this earth, and not dwell on identifying myself as a victim, is so important.”

What is your hope for the future?

“I am currently on my third trial, but that may end in November due to the tumours becoming resistant to the investigative drugs.

For me there is no yesterday, there is no tomorrow, I just live for today. I cherish each new day I have with my family. Maybe if the universe allows, I will see my grandchildren grow, and when I finally do depart through the Magic Door they will remember me as a happy, loving and determined soul who has been a part of their lives.”

How did you feel when your mum was diagnosed with endometrial cancer?

“I was temporarily living in another state when I received the news about my mum’s diagnosis. At the time, I felt helpless, worried and upset that I couldn’t be there to give her a big hug.

The uncertainty and not knowing what the future held was extremely hard, although like so many I tried to be optimistic while clinging to the hope that the radiation and surgery were successful.”

Can you tell us about a tough time during your mum's treatment, and what got you through it?

“There have been numerous tough times over the last few years. One of the tougher times was when my mum was told following a three-year remission that the cancer had spread to her lungs, it was now classed as stage 4 cancer and she was given 18 months to live (this was back in 2016).

Over the past five years, my mum has been continuously on and off numerous trials. Each time she was taken off a trial, it was extremely tough as we didn’t know what the future held with regard to future trials.”

Can you tell us about one of the lighter moments during your mum's treatment or something that made you smile?

“My mum is a super positive person and a lot of fun to be around. Her quirky, fun loving, child-like personality brings about laughter to all, pretty much on a daily basis.

I remember sitting with Mum on numerous occasions in the chemo ward as she was hooked up to the drip and she would be flirting with the younger male trial coordinator, dropping one-liners here and there. I’m certain she looked forward to each chemo day as it meant she could have some fun with the staff at the hospital.”

What do you do to support your own mental health while helping your mum through treatment?

“Seeing my mum or giving her a phone call during this lockdown always makes me feel better. I express my feelings and thoughts through my art, and this release is extremely therapeutic for me. My little black Cavoodle, Teddy, is also there to lick away any tears and is always in my arms when I need a hug.”

What is your hope for the future?

“Ideally, I hope that a trial or a treatment to eradicate this cancer is discovered in time to save my mum’s life and that of so many others. I wish to spend more days sharing moments with my mum, laughing, crying, sharing our deepest and darkest thoughts.

My mum is the most amazing person I have ever known. For anyone who comes across her path, they will be fortunate to see and experience the ‘Merry magic’ that oozes from within her.”