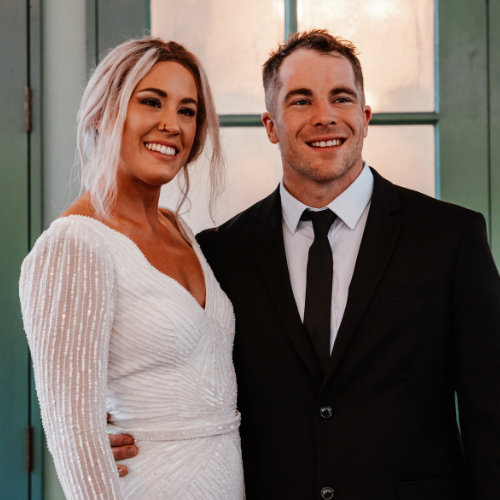 On her 30th birthday, Laura acknowledged it was time to have a health check.  She had no real concerns; it was just something she felt that she should start doing routinely. Laura was really fit, working out with CrossFit and played competitive netball.  However, she was totally flawed when tests came back positive, and she was given a diagnosis of stage 1B cervical cancer.

Laura underwent two surgeries and was looking forward to being given the all-clear but five months later her Gynaecologist noticed some things about her cervix that didn’t look right, so the doctor took samples and sent her for further scans. The cancer had returned. It was Stage 4 cervical cancer.  “The doctor called me a few days later with the diagnosis and told me it had spread to surrounding lymph nodes and as far as my lungs.” Her oncologist went on to “give it to me straight, telling me I had 18 months post-treatment to live.”

Laura didn’t really have any symptoms however she recalls “Just before my doctor’s appointment to hear the diagnosis, I had some lymph nodes swelling in my groin.” She also now understands that “what I believed was just scar tissue and healing from previous surgeries was in fact the tumour!”

Told that her situation was perilous, Laura prepared to start chemotherapy and immunotherapy treatment immediately.  Preserving her fertility was the other big worry Laura had. “As it turned out, I didn’t have any time to try methods to freeze my eggs. I’m glad I went ahead with treatment immediately, even though it was at the sacrifice of my ability to have children.”

Laura underwent treatment with an immunotherapy drug that had only been previously used in other types of cancer, but not for cervical cancer. Because of this, the drug was not available on the Pharmaceutical Benefit Scheme (PBS) and had to be self-funded.  Her friends, colleagues, and others came to Laura’s rescue donating to a ‘Go-Fund Me’ page to ensure that she could have access to the drug.

When she tells people about her diagnosis invariably, they ask “didn’t you get your HPV vaccine at school?” While nearly all cases of cervical cancer are caused by Human Papilloma Virus (HPV) exposure, Laura’s cancer was unique and rare as it wasn’t caused by the virus. It is thought that this represents approximately 1% of all reported cases.

"HPV vaccination will certainly reduce the prevalence of HPV associated cancer such as cervical cancer in the future. However, there is a lag time for effect of the HPV vaccine to have an impact & we are still seeing women being diagnosed with stage 4 cervical cancer, usually in the prime of their lives. A small number of cases are also not HPV related, as in Laura's case. We need better funded therapies for metastatic cervical cancer and a recent phase 3 trial has shown that the addition of immunotherapy (pembrolizumab) to standard first line chemotherapy improves 2 year and overall survival rates with only modest additional toxicities.” Says Associate Professor of Medicine Dr Jeffrey Goh, Medical Oncologist and ANZGOG member.

After all that Laura has been through, she believes positivity is the key.  “Trying to draw light in what seems a dark time is what keeps you going.  A positive mind leads to positive results I’ve found.”

By making a donation to the Honour Wall, you can honour a loved one in your life in support of pioneering gynaecological cancer research, for women like Laura.

Picture: Laura on her wedding day with her husband Evan