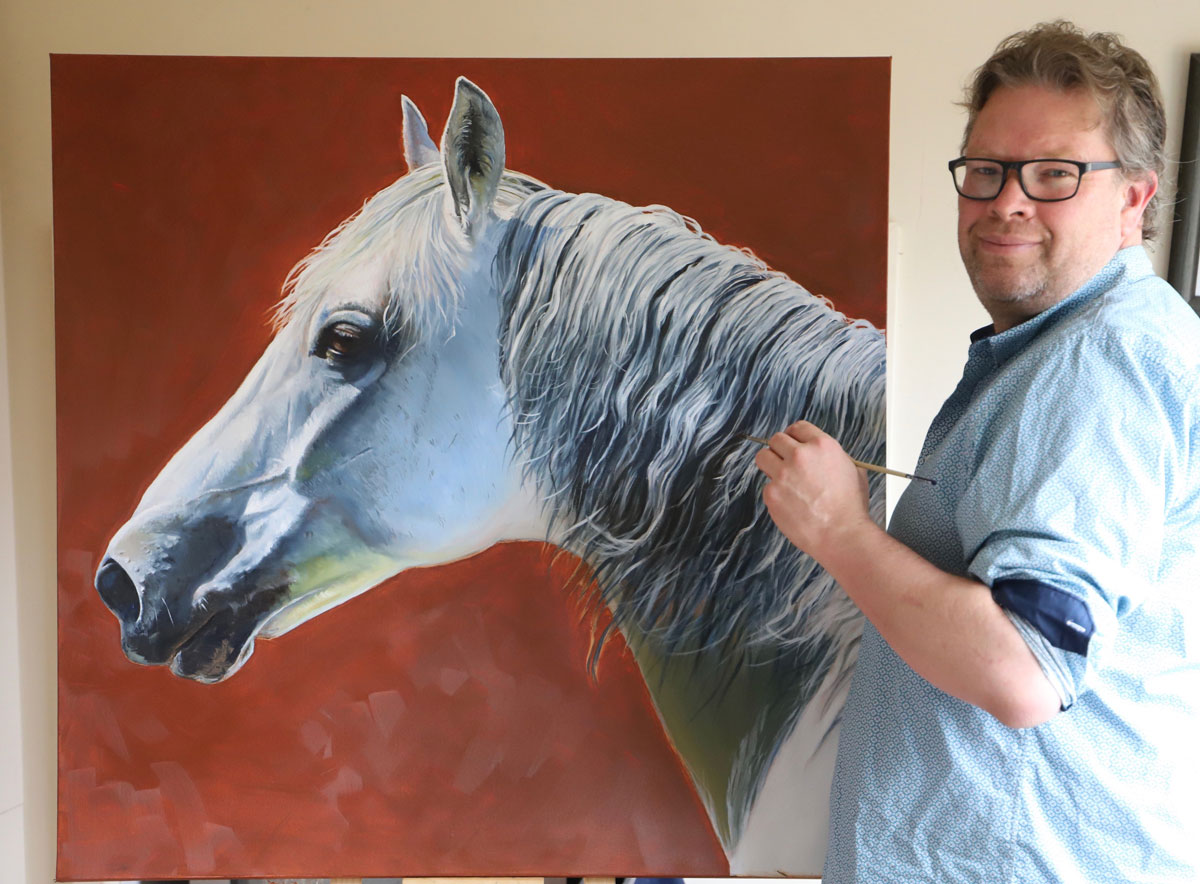 Honouring a life of adventure

Travelling is off the cards for most of us right now, but there’s still one way we can all be transported to glamorous cities and far-off lands – art.

Artist Jason Roberts has been inspired by the historic city of Vienna in his work Lipizzaner, which he’s contributed to the Honour Her online auction to raise urgently needed funds for gynaecological cancer. This special piece is a tribute to his much-loved aunt Gabrielle, who passed away from cervical cancer.

Gabrielle was an opera singer, and lived and performed in Europe for many years. She returned to Australia when Jason was a teenager, sharing her passion for travel with her young nephew.

“Gabrielle very much instilled in me a love of travel and the exotic,” says Jason. “On visits to her house I would pore over her photo albums and eat her spicy, Middle Eastern inspired food, all the while transfixed by her many tales of international adventure.”

As well as cultivating Jason’s wanderlust, Gabrielle was also an enthusiastic supporter of his art studies. Then, in 1986, she was diagnosed with cervical cancer.

“At the time I was planning my own pilgrimage to London to begin my art career, which Gabrielle heartily supported me in,” Jason says. “Just as I began following her footsteps, the cancer swiftly, tragically, took her from us.”

More than 30 years on, Jason is honouring Gabrielle’s memory with Lipizzaner and its depiction of Vienna’s famed Lipizzaner horses from the Spanish Riding School, which he sketched in situ on a 2012 visit to the Austrian capital.

“Vienna was Gabrielle’s favourite city,” explains Jason. “One of my favourite photos of her shows her in front of the famed Wiener Staatsoper, the city opera house, circa 1976. Gabrielle loved the Spanish Riding School in Vienna and she spoke of it often.”

Gabrielle’s time as an opera singer took her around the world, and so too has Jason’s distinguished career as an artist. He has been a professional artist for more than 25 years, painting and exhibiting in the United States, Europe, Asia and around Australia.

Jason was the youngest artist asked to exhibit in the landmark 1996 exhibition Natural History at New York City’s Spanierman Gallery. A decade later, his Gondwana solo exhibition opened to acclaim in Tokyo, Japan.

Jason began painting horses as part of a 2008 commission for the Sultan of Oman. He has since painted thoroughbreds at Royal Ascot and Chantilly, France, as well as Royal Marwar horses for the Maharaja of Jodphur, in Rajasthan.

Animals and the natural world make up much of Jason’s body of work, but he also paints urban landscapes from Australia and abroad, along with delicate, highly sought-after botanical studies.

You can view and bid on Jason Roberts’ piece and a collection of other works by clicking on the button below.