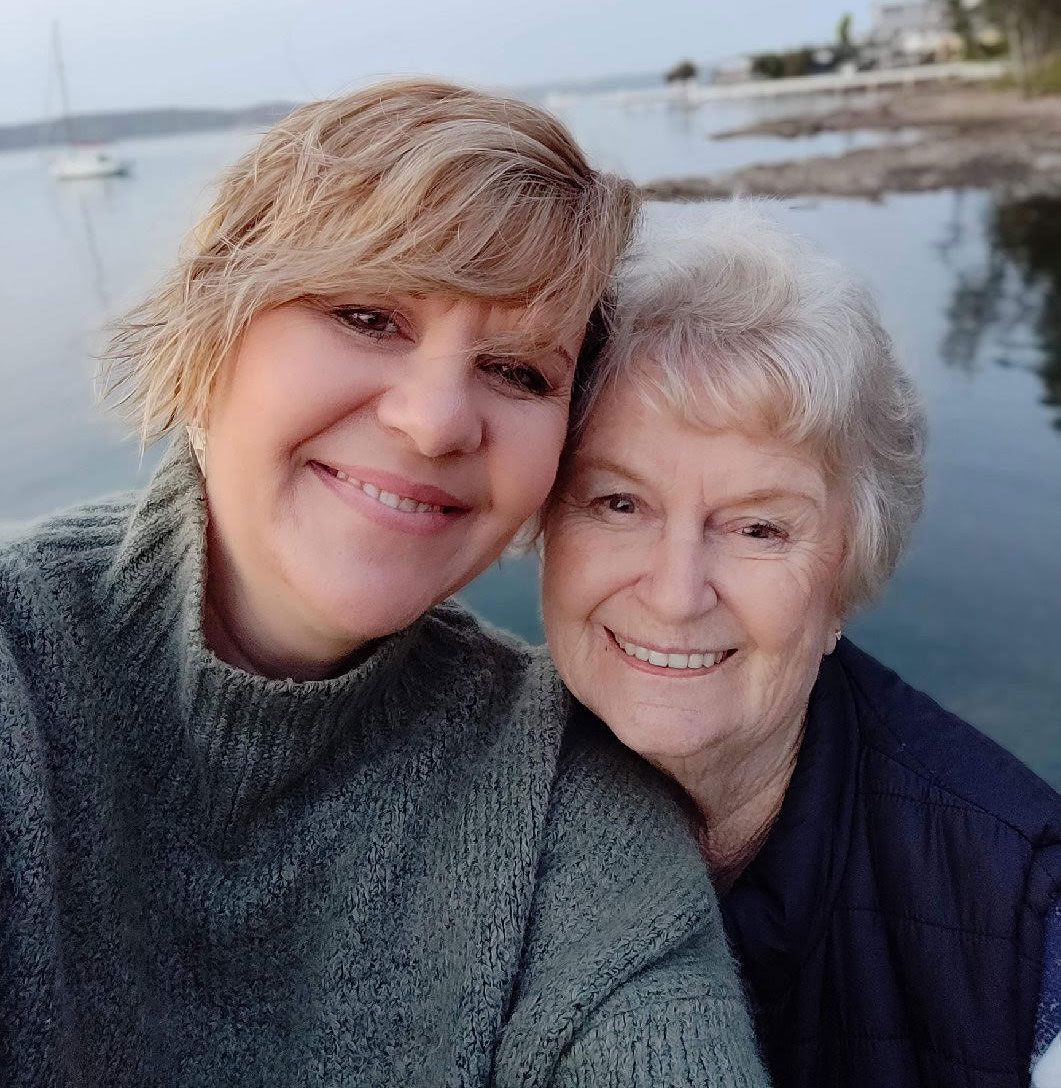 A local waterway wasn’t the only inspiration behind Annie Palmer’s painting Bushland Creek, which raised funds for cancer research. It reflects a personal journey, after her daughter Aleesa was diagnosed with cervical cancer.

“Gynaecological cancer is such an important subject that effects so many,” Annie said.

“The best way you can honour these women is to show your admiration and continue supporting them.”

Aleesa Palmer certainly had a network, an 80-person celebration wasn’t unheard of, but life wasn’t all a party.

“Back when dinosaurs roamed the earth, in 1992, I was 20-years-old and planning my big 21st birthday party. My outfit was picked, music and food sorted,” Aleesa remembered.

“My period was always painful but was feeling even worse, so I went to the GP who took a pap smear. A few days later they called and said to come in straight away.”

Know your body. It's yours to care for

The test uncovered a ‘CIN3 cell change’, meaning Aleesa had a severe presence of abnormal cells on her cervix, that could become cancerous.

Treatment has since evolved but almost 30 years ago, Aleesa required a cone biopsy to remove affected cells, diathermy to laser off abnormal cells and contraceptive injections to potentially slow cell changes.

“Very quickly I was in hospital. They took more of my cervix than normal to get them all but I thought that was the end of it.

Despite the heavy news, there’d be no crying at Aleesa’s 21st party.

“I just thought ‘chin up’ and the party was a huge hit, I had the best night.”

When the music stopped, the high cost of treatment played on Aleesa’s mind.

“At 21 I wasn't thinking of having a baby but I wanted children. I was devastated.”

She turned to her Mum, who’d undergone a hysterectormy herself in her early twenties.

“Aleesa had some very deep days and I was determined to help keep her afloat by always being there for support and to listen,” Annie said.

“I elated and ready to get on with life,” Aleesa said. “I met my partner, moved around the country and planned a future.”

“At the first scan I was told my pregnancy wasn’t viable. We were heartbroken.

“The miscarriage was terrible. I ended up calling an ambulance, was hospitalised twice and needed four surgeries.

“I was in the maternity ward surrounded by women with babies while mourning my own. I was in immense pain physically and emotionally.”

Doctors advised waiting six months before trying to become pregnant, just enough time for the pair to elope in Norway!

“We'd been married a few months when I began feeling unwell and sure enough, I was pregnant! But I was in pain, so we went straight to the emergency room.

“The same doctor as last time rushed me in for an ultrasound. He gasped and said, 'You don't do anything the easy way!'”

Turning the monitor to face the anxious couple, the doctor pointed out not one but two healthy babies.

“We were having twins! My parents were so excited, I think we were all in shock for months.

The joy had an undercurrent of fear for Annie.

“We counted every day of her pregnancy, fiercely hoping everything would be alright,” Annie recalled.

At 33 weeks pregnant, Aleesa’s marriage abruptly ended after uncovering an affair and she moved home.

“It was a huge year of emotion; miscarriage, marriage, pregnant with twins, partner left me, moved state. But finally, in April 2005 my beautiful girls were born,” Aleesa said.

Communicate with your children and break the cycle of taboo

Sibhon and Monique are now 16-years-old and have a strong relationship with their mum.

“Many of my friends don’t talk to their mothers about anything personal but we need to be open.

“My girls understand the importance of knowing your body and monitoring their health.

“They’ve had the HPV immunisation to help protect them from cervical cancer and we support any research into women's health.”

Annie wholeheartedly agrees and feels “absolutely wonderful” when she sees her “gorgeous granddaughters”.

“Education is powerful and so is hearing the experiences of others who’ve tackled these illnesses.”

At WomenCan we value personal stories, like Annie and Aleesa’s. They raise much needed awareness and understanding of gynaecological cancer.

A life-changing donation to WomenCan, will support pioneering research.

If this story raised concerns for you, please contact your GP. For immediate support, call Lifeline on 13 11 14