With ovarian cancer holding the lowest survival rate of any gynaecological cancer, awareness of symptoms and disease prevention are integral to women’s health.

Jacinta is a survivor of ovarian cancer, who experienced few symptoms and no pain prior to her diagnosis. She has kindly shared the story of her diagnosis and treatment with ANZGOG to help raise awareness.

On a trip interstate to see her family, Jacinta noticed sudden swelling of her abdomen for several days. This affected her exercise regime and the clothes that she could wear. Upon returning home she noticed that her waist had increased in size and she had significantly reduced mobility, requiring help to get in and out of bed. At first, she believed that this was the result of inflammation medication that she had been prescribed, but upon seeing a different doctor she was referred for a scan.

Despite not being able to feel it, days later she was told that she had a 16cm tumour on both ovaries. This began her journey of treatment for high-grade, aggressive, serous epithelial ovarian cancer. After several appointments and tests, the sentiment of the doctors did not instil Jacinta with confidence, as her disease was described by her gynaecological oncologist (surgeon) as the case for “management, not cure.”

In conjunction with the draining of a significant volume of ascites, Jacinta commenced intravenous chemotherapy. At this point, she was advised by her specialist to contact her children, including her son who lived abroad at the time. She was advised that he should return home to see her as their planned visit for Christmas may be too far into the future. It was September at the time of her diagnosis.

Upon talking to both her son and her daughter, she was asked “bruising questions” of “how long?” and “are you terminal?”. Jacinta explained that she “tried to be reassuring but five minutes on the internet made it hard to sustain much hope. Telling my mother, siblings and extended family was terrible but there is much support and love there.” Her friends and family attended every one of her chemotherapy sessions. 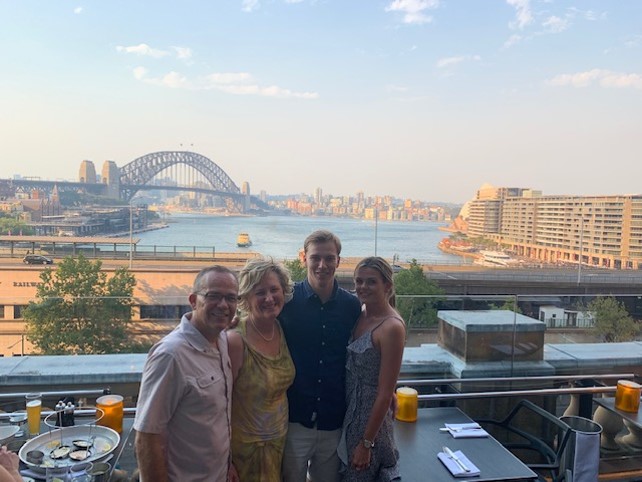 She felt similarly about the team of health workers supporting her, “The oncology nurses, the stoma nurse, dieticians, and admin staff were lovely, radiating kindness, generosity, and compassion, but not much hope.”

Months later, Jacinta underwent debulking surgery and commenced recovery. Her post-recovery diagnosis brought “tremendous relief”, with her cancer being diagnosed at Stage 3c. She was responding well to clinical treatment, as the surgery was considered optimal, meaning no visible cancer remained. Despite this, her response to chemotherapy was low. As a result, it was suggested she commence PARP inhibitor therapy, which at the time was a costly medication, projected to cost between $8,000 and $10,000 a month.

It was out of an “act of will” that Jacinta decided to recommence chemotherapy in January and pay $5,000 to have her tumour tested in the United States. This was a major turning point for Jacinta’s treatment. “When the results arrived, the oncologist was so excited we could barely understand him. Though the repeated genetic testing in Australia had found no genetic abnormality, the US report came back with evidence of a BRACA 1 gene deletion in the tumour itself. This was the best of all worlds. It meant that the gene deletion was only in me and that my children and extended family were no more vulnerable than the normal population and it gave me compassionate access to the PARP inhibitor (which had been previously rejected in December 2019).”

“While we were sitting with him, the oncologist immediately cancelled all further IV chemos, pushed for the stoma reversal surgery, which I then had in April 2020, so that I could start the PARP inhibitors within the eight-week window of opportunity post-chemo. My husband and I went home to celebrate. We went from doom to hope within the space of one 30-minute appointment.”

Now undertaking a two-year treatment of PARP inhibitors, which now have expanded coverage under the Pharmaceutical Benefits Scheme, Jacinta has reflected on a time of “of emotional upheaval, of despair, confusion, and now hope.”

Jacinta is a major proponent for ovarian cancer awareness. In light of Ovarian Cancer Awareness Month, she delivers her message to all women:

“Ovarian cancer is called the ‘silent killer’ for a reason. While we are waiting for our wonderful researchers to develop a screening test the immediate way to reduce the incidence and improve survival rates is through awareness and knowledge of symptoms. This may be that women talk more openly to each other about their family history and gynaecological health, talk to our GPs, and most of all not listen to those dismissive voices in our own heads or other people saying ‘well, you shouldn’t worry, what do you expect at your age, don’t eat as much, don’t make a fuss, you’ll be fine and so on’.”

Jacinta is also thankful for the work of the volunteer program Survivors Teaching Students that she is actively involved in, “[the program] facilitates women to speak directly to future health professionals—medical, nursing and allied health and to the generous interest of those future professionals on whom women’s lives depend. I would encourage other women and carers to donate or to join the program until ovarian cancer no longer exists as the ‘silent killer’.”

Survivors Teaching Students® is a volunteer program that brings the faces and voices of ovarian cancer survivors and caregivers into the classrooms of health professional students to teach them about women’s experiences with the disease. Find out more about the program here.