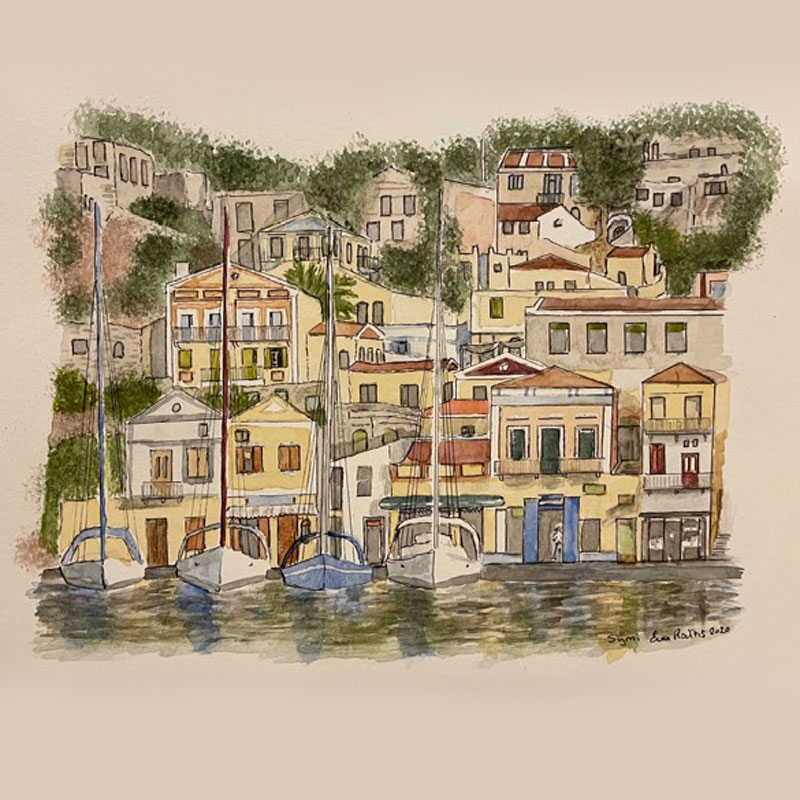 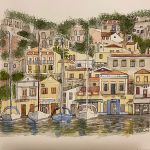 Making the best out of a challenging period during the pandemic I have been “virtually” in search of things that would inspire me to paint.  Travel was quickly becoming something we were lucky to have experienced and something that we won’t be able to do for some time yet.  But, as I searched the Internet on my iPad through hundreds of photos, it was like I was looking through my very own window and I felt I was actually there.  I felt the sunshine, the fresh breeze, I could smell the salt of the sea and my eyes could not get enough.  I found myself particularly drawn to historical buildings or romantic places, some I have yet to visit.

Symi is a place that is in my heart.  It is the birthplace of both my grandmothers and where they spent most of their childhood.

I was just over two years old when I was kissed goodbye forever by my paternal grandparents, not understanding I was leaving my birthplace, Alexandria.  I was excited because my mother and I were leaving to join my father in Melbourne.  I never met my maternal grandmother because she had died when my mother was only seventeen.  Both my grandmothers were very strong women.  My paternal grandmother, who I was named after virtually brought up her six sons and two daughters on her own as my grandfather worked on a commercial shipping company taking him to far away lands and returning home every two years.  My grandfather’s salary helped sustain his large family, but it was my grandmother who was left to manage the household.  She lost one of her sons, aged eighteen.  Another son who contracted dypyheria as an infant was blind and she remained his main caregiver for the good part of her better years.  Yet, my grandmother would cook up a large pot of soup and with the help of one of her sons she would distribute the soup and bread to the poor.

My maternal grandmother would work in a hotel resort as a cleaner so she could provide butter on the table for her family.  My maternal grandfather was a carpenter and there was not always enough money coming in.  There were times he would be paid with pigeons if that was the only way of payment.  My grandmother would cook the pigeons for her family to eat as we would cook chicken.  She was a very strict mother and was the disciplinarian of the two parents, with a son and three daughters.

Though I wish both my grandmothers had had an easier life, I am proud to be related to such strong women.  I would like to think they both had run up and down the narrow streets or climbed the steps of this part of the relatively small Greek island.

I am very excited to have the opportunity to support WomenCan through their initiative “Honour Her”.  With so many issues in our world currently it is easy to forget the important work done by these incredible not-for-profit organisations.